In undergoing a strategic transformation from regional silos to a global, high-performing team, the Legal & Compliance Department at James Hardie Industries—the world’s largest manufacturer of fiber cement products, with annual revenue of over US$2.9 billion—had hit some stumbling blocks. Department leadership reached back to Australia, where the company was founded, to find the solution to its struggle to deploy legal operations tactics. JHI’s partnership with PwC NewLaw enabled the department to gain consensus on priorities, pull multiple value levers, and realize meaningful financial results. The project also marks the incursion of a Big Four consulting firm into the legal operations arena—possibly the first of its kind and certainly a harbinger of more to come.

Joe Blasko is General Counsel, Chief Compliance Officer and Company Secretary at JHI. For a company with a market cap of over US$14 billion, the Legal & Compliance Department is surprisingly small, comprising fewer than two dozen individuals. “Despite our size, we punched well above our weight,” he says. “But it became very clear that we were going to need to focus our resources on doing more with what we had.” Upon meeting PwC NewLaw Partner Mick Sheehy at a legal conference in Sydney, Blasko realized legal operations was an area ripe for outsourcing. Sheehy brought experience and expertise to the table, having designed and executed design thinking projects during his previous tenure at Australian telecom company Telstra for which the company was named an ACC Value Champion in 2017.

“JHI is the perfect client. They had already done much thinking, and there was no need to convince them of the opportunities inherent in a transformation,” says Sheehy. 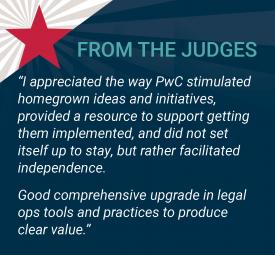 In February 2020, JHI and PwC NewLaw kicked off their effort to strategically review the legal and compliance function, including a department-wide diagnostic, to further the transformation agenda. Dubbed “Project Kafka” for all its metamorphosis overtones, the program combines people, process, and technology in a partnering model that empowered both entities to deliver essential, short-term outcomes. The Legal & Compliance Department was restructured along global practice lines with Practice Area Leads for corporate, employment, litigation, commercial, intellectual property, compliance and company secretarial areas; staff began holding weekly stand-ups to allocate work.

They also formed internal grassroots innovation forums to tackle specific problems around low-value and administrative work, using a continuous improvement framework. Outcomes include an automated NDA tool, a new marketing review process, a new legal intake portal directly into a new matter management system, and a roadmap for maturing the Compliance function. Sheehy, who had implemented similar forums at Telstra, says these team-based structures are important to transformational success. “Top-down directed change is not as effective,” he says. “Members of the legal department who are doing the work are involved and invested in co-creating solutions. Newer and more junior members of the team have less bias, less fixed mindsets, and often are the best at coming up with new ways of doing things.”

Other elements of the project included:

Perhaps the most novel aspect of this project is the creation of a new and ephemeral role to provide hands-on support, guidance, and encouragement. PwC provided a “legal transformation specialist” who sat within JHI for six months to support the legal team’s daily operations, providing ongoing coaching and mentoring to the entire team to navigate any roadblocks to change.

“We previously had lacked confidence in our ability to hire a qualified legal operations professional,” says Blasko. “This resourcing model, which also included a flexible range of skilled resources from within PwC NewLaw, meant that we didn’t need to recruit and onboard permanent legal operations staff until the program was well advanced and we had a better understanding of the specific skillset we needed.”

That’s entirely the point, says Sheehy: for the PwC team to eventually render themselves obsolete. “It was really fascinating because we were not dealing with an existing legal operations function. This blank slate gave us creative license for an accelerated, ambitious program.”

The JHI team engaged key business stakeholders early on. “We were stuck,” says Blasko. “We needed to think about how to get unstuck in a different way. This required an inside sales job which ultimately helped us to achieve a core objective around enhancing our business relationships.”

Within 12 months, JHI had achieved 25 percent savings against average annual external legal spend. Although alternative fee arrangements were encouraged but not required, JHI received more competitive pricing with discounts of 15 to 20 percent, volume discounts, free and value-added services, and tighter scoping. Implementing LawVu, the contract and matter management platform, enabled the creation of more than 30 matter templates that cut the average time to assign work in half.

These and many other, smaller changes evidence the true transformation of the Legal & Compliance Department at JHI. “People rolled up their sleeves and engaged in very real discussions about the problems of the time and tried to find solutions,” says Blasko. “It has just been phenomenal.” 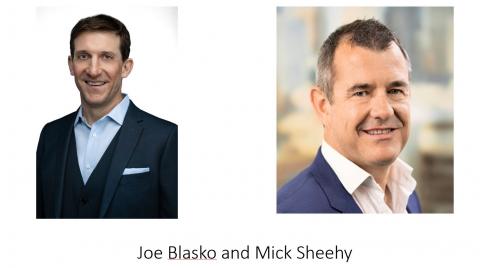