For the last chapter of the COVID-19 Member Flash Poll Series, ACC reached out to in-house members to inquire about the effects of the pandemic on talent management and job security. As the future of the economy remains uncertain, we wanted to learn more about how legal departments and organizations all over the world are responding to this extraordinary situation.

The flash poll opened on August 4 and closed on August 10. Five thousand ACC members were randomly selected to participate via email, and we received 487 responses. The survey results are presented below.

A majority of surveyed members (51 percent) reported that their job is safe and are not concerned at all about losing it. Twenty-six percent admitted being a little concerned, 15 percent expressed some concern about job security, and six percent reported being greatly worried about losing their job. Two percent of members surveyed indicated having lost their job because of COVID-19.

Most members are not thinking about switching jobs at the moment, according to our flash poll results. Eighty-three percent report that they are not actively looking for a new position, while the rest, or one in six, responded that they are in the market.

We inquired about whether the economic uncertainty resulting from the pandemic has had an impact on in-house counsel compensation. A solid majority (76.5 percent) responded that their compensation has not been negatively affected, and 23.5 percent reported a reduction in their base pay and benefits.

Among the three in four in-house counsel members surveyed that reported not having experienced a reduction in compensation, a majority (61 percent) are confident that this scenario will not happen. Conversely, 10 percent expect a pay cut or a decrease in benefits in the near future, while 29 percent are not sure whether their compensation will be reduced or not.

Only one third of participants reported that COVID-19 has had no impact on the talent management needs of their legal department. In terms of hiring, 20 percent indicate that new hires have decreased since the beginning of the pandemic, and 28 percent said that their legal department has implemented a hiring freeze — an additional six percent of respondents said that their department had considered this measure. 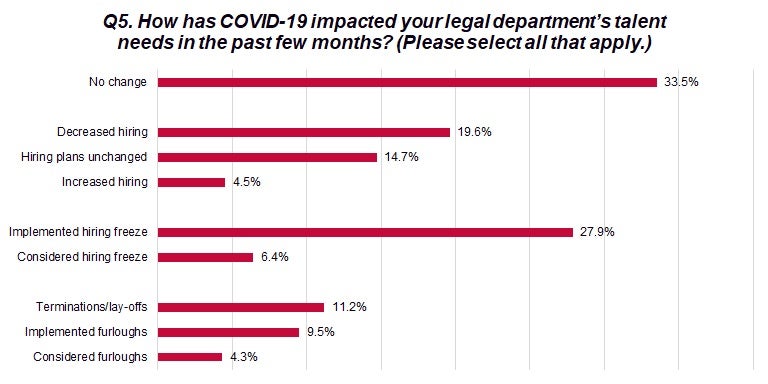 In-house participants were asked whether they were aware of any plans that their organizations had implemented to prevent any (or additional) hiring freezes, lay-offs, and furloughs. A majority of 63 percent indicate that teleworking has been implemented when possible, and 52 percent identified cutting costs as the action taken to avoid letting staff go. At least one in five participants reported that measures like using vacation time (24 percent) and reducing executive compensation (21 percent) have been implemented in their organization. 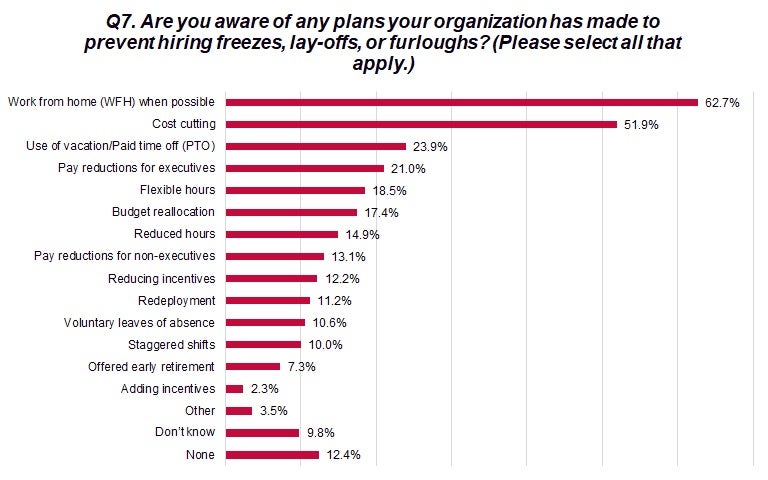 Other measures that have been put in place in some legal departments include the adoption of flexible hours (19 percent), budget reallocation (17 percent), a reduction of work hours (15 percent), non-executive pay cuts (13 percent), and a reduction of incentives (12 percent).

Additional measures implemented by legal departments beyond the list of options provided include salary and hiring freezes, and reducing benefits. Ten percent of respondents did not know if any measures had been implemented to prevent lay-offs and furloughs, and 12 percent indicated that their organization had no specific plans in place.

Finally, we asked ACC members if annual performance reviews had been affected as a result of the extraordinary situation created by the pandemic. Seven in ten respondents reported that no changes have been considered regarding employee evaluations. Ten percent report that performance reviews will go ahead with some flexibility in goal setting. Six percent reported that evaluations will be delayed this year, and under two percent indicated that employee reviews will be either cancelled or optional.

The survey results suggest that COVID-19 has impacted legal department talent management and in-house counsel job security, but not dramatically. Although a majority of members surveyed are not concerned at all about losing their jobs, only one third reported that their legal department had not experienced any changes in relation to hiring practices, lay-offs, and furloughs.

This fifth flash poll concludes our series on the impact of COVID-19 on ACC’s membership. Additional key resources are available on the COVID-19 – ACC Resource Center.