Talk about your growing pains. For Compass Group, a global leader in food and support services that employs more than 200,000 associates in North America, growth in their service footprint brought a spike in the number and severity of liability claims. Compass’s docket of auto and general liability lawsuits had more than doubled in five years, causing a significant increase in both indemnity and legal spend. Further, the lawsuits were concentrated predominantly in such difficult venues as New York City, Philadelphia, and California.

“Compared to non-litigated claims, litigated claims were 80 to 85 percent of our financial exposure,” explains General Counsel Jennifer McConnell. “We didn’t have lawyers who appreciated litigation strategy and cycle times managing the work internally, and the situation was getting unwieldy as our docket continued to grow. Working with 65 law firms and more than a hundred lawyers, there was no opportunity for consistency. We needed to get control of these litigated claims.” 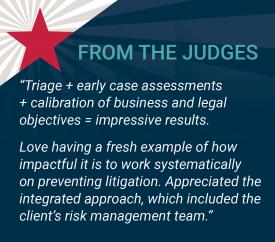 In researching possible solutions, McConnell and her team learned of the partnership between Tyco and Shook, Hardy & Bacon to handle nationwide product liability claims as an outsourced portfolio, an initiative that netted them ACC Value Champions recognition in 2012. Compass Group established a similar strategic partnership with Shook in 2015. Under the arrangement, Compass’s small in-house litigation team relies on a team of Shook attorneys to manage the litigated docket under a monthly flat fee arrangement. Compass brought Mike Roberts, formerly of Tyco subsidiary ADT Security, onboard as Vice President and Associate General Counsel.

“The docket presented a good challenge, although it was also a risk,” says Roberts. “We looked under the hood and saw an opportunity to take even greater control.”

The partners set out to achieve three primary goals:

The Shook team brought processes, strategy, and resources to the table in a model that had been refined with time and experience, says Charlie Eblen, Relationship Partner at Shook. “The biggest difference was, we approached the portfolio opportunity knowing that the transition process is very challenging. We knew that we were going to be taking over cases in different phases and different jurisdictions. We had learned from the Tyco experience that initially being overprepared and overstaffed would help us take on this monumental task of managing more than 300 cases in various stages of workup,” he says.

The team quickly moved to address the most pressing needs: deconstructing the old model by creating immediate scalability and revamping their approach. Shook and Compass triaged all pending cases by placing them in one of three categories:

Allotting substantial resources to the first two types of cases allowed the team to quickly reduce the ligation docket by 25 percent in the first four months. During the early transition phase, Compass and Shook also worked to design a case management philosophy that would decrease liabilities and cycle time and reduce risk and case exposure.

First, resolve clear liability claims and cases early. Second, fight the claims and cases that merit the fight. The team dedicated resources to these cases with strong dispositive motion prospects or those most likely to require trial.

“We quickly isolated the winners from the losers, making the initial evaluation within 90 days,” says Roberts. “You can usually determine this for 80 percent of cases. They will never get better over time and are not worth the investment of time and money. Instead, we would use our resources to fight for the winners.”

The third pillar of the new approach remains the most fundamental. Compass and Shook applied what they were learning to mitigate future liability exposure in a preventive approach designed to avoid claims, lawsuits, and spend. They revised the pre-suit claims process to better empower the Compass risk management team to appropriately react to and/or plan safety protocols, thereby reducing claim volume and the number that moved to costly litigation.

Their litigation strategy was refined as well. “We realized that to bring down the volume, we needed to change law and precedent,” says Eblen. The team worked to target hot spots in the litigation docket, focusing on types of claims and troublesome jurisdictions. They strategically selected cases for legal issues motion practice and trial, and even appeal, to change Compass’s image as a defendant in claims and litigation. “We needed to shake the bullseye target on our backs,” says Roberts. “By filing and winning many more early summary judgement motions, we have redefined the role of the contractor in premises claims.”

Since fall of 2015, the Compass/Shook partnership has reduced claims and lawsuits by more than 50 percent. Compass has reduced its all-in legal spend by 30 percent.

“We have accomplished so much more, with so much less, than the company has experienced before,” says McConnell. “This strategic approach would never have been possible with 65 firms.”