When John Burke assumed the role of Head of Outside Counsel Management (OCM) at Swiss financial services firm UBS in January 2020, the sophisticated, 750-person legal organization was well along on its value journey. The OCM team had been put in place four years previously during a time of substantial effort and acceleration of the company’s drive to derive greater value from legal spend.

“The component parts were already in place, such as panels, billing guidelines, audits using artificial intelligence, and relationship meetings with law firms,” says Burke. What came next was the concept of smart sourcing, in which numerous factors combine to inform strategic decisions about the engagement of external resources. “It can be difficult to explain the full picture to others,” he says. 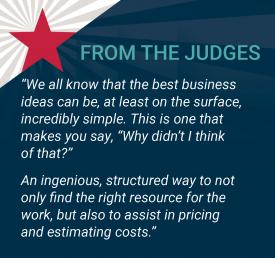 To assist, the OCM team diagrammed the external engagement process end-to-end, from the inception of a legal case through settlement or dismissal. As they did so, they identified gaps and solicited feedback on changes and tools that could affect the decision-making process. They designed a decision path to form the foundation of the Smart Sourcing Framework now in use at UBS.

Now, when a new matter—litigation or transaction—hits the desk of one of UBS’s in-house counsel, the decision path takes the attorney through a series of resourcing decisions that ladders up from the least expensive option to the most expensive: engaging outside counsel. Options range from the initiating attorney handling the matter him- or herself, pulling in a member from another team, the use of law firm secondees, alternative legal service providers, and so on. Essentially an elaborate decision tree augmented with tools for decision making at each step, the decision path makes the resourcing process much more thoughtful. Initially piloted within the Americas Litigation Team, the framework has since been rolled out globally.

Careful change management was not only at the heart of this initiative, but also critical to effecting the behavioral and mindset shift the OCM team sought.

“Rather than simply picking up the phone and calling outside counsel—the kneejerk reaction that some in-house people have—we said, ‘You have to be more thoughtful. You have to be smarter. We want you to look at all of these options that are available to you, even those you may not have used in the past, and consider them now going forward. We definitely want you to do it for new stuff, but we also want you to do it for existing stuff,’” Burke says.

To drive adoption, Burke and his team conducted a series of presentations and training sessions to familiarize the members of the global Group General Counsel department with the Smart Sourcing framework, focusing initially on groups with large outside counsel spend. They offered education to increase awareness of legal service providers as well as such techniques as alternative fee arrangements (AFAs), following a project and governance plan that serves as a roadmap for the rollout.

Further, as Burke notes, the approach was neither rigid nor bureaucratic. Rather, the tools are offered as a way to relieve the cost pressures on internal staff, so there was little resistance.

The framework was made more robust through the development of tools to support the decision-making process. For example, Vincenzo Purificato, Director of Outside Counsel Management, worked with others in-house to develop a proprietary artificial intelligence tool to support AFA assessments and legal fee estimates. The legal audit team—three people who previously reviewed invoices manually—helped train the tool, which uses machine learning and natural language processing, to understand the costs associated with various tasks within a matter. The system now flags outliers within invoices and gives UBS important information to leverage.

“If it is a simpler task, we can use that along with our appropriate staffing model to challenge outside counsel on why a partner might be performing that task,” Purificato says.

Another key element of the Smart Sourcing Framework is the UBS Commercials Repository, a user-friendly database that serves as a single source for in-house counsel to find all negotiated terms with outside counsel. The repository includes tools that allow quick comparisons of firms by timekeeper rates, discounts, and so forth. The commercial terms permit engagement-level bidding for cases through a reverse auction platform, which increases competition among panel firms and brings greater savings.

As a result of the Smart Sourcing Framework and the associated tools—many of which are still being developed—UBS has been able to reduce legal fees by 15 to 20 percent year over year.

Showing pride in being the first Swiss company to be named an ACC Value Champion, the executive sponsor of the project, Thomas Barothy, Chief Operating Officer of the Legal Department, said, “For me, participating in the ACC Value Challenge is important because we are headquartered in continental Europe rather than America, and the team deserves this recognition. The Smart Sourcing Framework has brought fundamental change to our department, changing the quality of the discussion about the best way to provide a specific legal service.”