Pearson plc, the London-headquartered global education company, committed in 2017 to becoming a simpler, more efficient organization. While that might seem a benign goal, the reality—the directive to reduce annual operating costs by £300 million by 2020—represented “an unprecedented challenge” to Pearson’s Legal department, which was required to reduce its annual budget by 25 percent, says Bob Mignanelli, Senior Vice President, Chief Operating Officer, Legal, and Associate General Counsel for Technology, Strategy and Operations. But with the unprecedented challenge came unprecedented opportunity. Partnering with co-Champ Morae Global Corporation, Pearson Legal created a transformational global delivery model to support commercial transactions around the world, known as the Transaction Services Center (TSC). In doing so, the department not only met its cost reduction goals but achieved a remarkable return on investment. 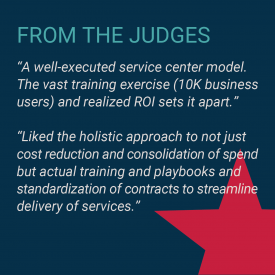 The prior state: A “white glove” concierge model for legal services that was not standardized or centralized. Although it was high-touch and very effective, it wasn’t optimal from an efficiency perspective, according to Mignanelli.

“When you run a concierge model, systemically collecting data, which is critical for running the legal department like other business functions, typically is not a key priority,” he says. “In order to make data-driven decisions, you need to fully embrace the use of technology and utilize a very different operating model.” Fortunately, the Legal department had done some pre-work in 2016 to analyze demand.

“We had a good hypothesis from the pre-work that we could increase productivity, put in a system that used standard workflows, provided data and analytics around transactional services, and transformed how those services were delivered with greater insights, all while driving down the cost of those services,” Mignanelli says.

Working with longtime Pearson partner Morae Global, Mignanelli crafted a vision for the TSC: driven by technology and bringing standardized processes, workflows, procedures, templates, and self-service capabilities into a unified, sustainable global function. It would be implemented as an end-to-end process, with Morae providing the bulk of legal services delivery while Pearson Legal provided subject matter expertise and a light layer of management.

“We knew other multinational companies had done similar transformations in different ways,” says Mignanelli. After talking with peers for advice and lessons learned, he decided to forge his own path. “We didn’t think the models at either end of the spectrum were the best fit for us, so we created a hybrid model, with a strategic partner that functions with us collectively to deliver legal services to the organization. We view Morae as an extension of our legal department, on the front lines, dealing directly with internal clients and negotiating transactions.”

While the cost-cutting directive from the top catalyzed significant change, effective change management was key to making it successful—so much so, in fact, that it warranted its own workstream (one of the 100+ workstreams created for the project). Personal outreach and “soft diplomacy,” organization-wide communication, resources, and training were key to driving understanding and adoption. The team trained 10,000 business users on the new process and conducted 39 training sessions for more than 1,600 end users. For TSC staff, they created 115 playbooks and 136 templates.

“Nobody really expects change of this magnitude from the beginning, so how it is handled is critical,” says Joy Saphla, President of Strategic Solutions at Morae. “The separate change management workstream was very helpful and enabled us to embrace the human and emotional aspects. We put a lot of focus on personalities, and mapped people and resource changes with emotional quotients in mind.”

The global nature of the company necessitated adjustments for cultural considerations, business practices, technology differences, and time zones. While the initial scope of the project was only four countries, it was later expanded to India and the Middle East.

“It is crucial to understand the differences and think through the elements needed to serve the international market,” Mignanelli says.

Morae dedicates 21 people across its Houston, London, and Bangalore offices to the TSC, including attorneys, project managers, technology experts, and an engagement manager.

Since the advent of the TSC, turnaround times on contracts have improved by an estimated 30 percent, and only 1.6 percent are escalated due to non-standard clauses. The annual cost of service delivery was reduced by 35 percent, 10 percent over initial goal. Mignanelli estimates return on the initial investment at 76.5 percent over the first seven months.