Whirlpool, founded and headquartered in Benton Harbor, Michigan, has been making kitchen and laundry appliances for over a hundred years. But that doesn’t mean they’re mired in the old way of doing things. Quite the contrary: Several years ago, the company increased its focus on Continuous Improvement (CI) methodologies, investing in training and resources for functions and teams across the company. Deputy General Counsel Aaron Spira was an early adopter and began to look for ways to bring CI principles into the legal team. 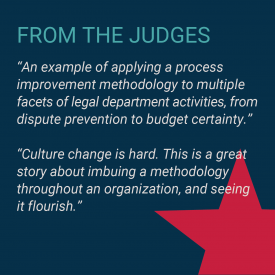 He felt that it made the most sense to start with the Disputes team, which represented the department’s greatest amount of spend. “It is our most consumer-facing group, so it was important that we were operating efficiently and effectively because of the large number of touchpoints with consumers,” Spira says. “There were also a large number of people doing very similar work. This part of our organization seemed our best chance to apply and showcase the benefits CI can deliver.”

Starting in January 2018, the entire Disputes team was given formal CI training and development goals. Many participated in a yearlong learning lab, while others took classes in person and online. They documented current product liability processes through “Standard Work,” then began to apply their training to identify waste, improve processes, and drive better results. Everything, from physical layout to technology to outside counsel, was fair game. The team used standing huddles around a white board to discuss ideas, prioritize actions, and track progress.

“Some team members’ initial reaction was that it wouldn’t apply well in a legal setting, that the work is too unique to each matter. But what the team started to realize is that a CI mindset is a very empowering and freeing way to do work.

“The transformation began slowly but picked up steam as team members realized they were empowered to correct problems they had previously just lived with. If you have an idea about ways to improve things, it has a multiplier effect. You are making things better and easier for a large group of people. It has been enlightening for all of us, but we definitely started with a healthy dose of skepticism,” Spira says.

One of the team’s key performance metrics is the total cost to resolve a matter relative to the amount of risk presented. Multiple CI projects were aimed at improving that metric, including standardization of best practices, introduction of collaboration tools, and reorganizing work for optimal resource alignment. The net result of these measures is a 28 percent improvement in the metric since 2017.

Product disputes often can lead to valuable information that can be used to improve product quality. The team designed a systematic, sustainable, measurable feedback loop with engineering and manufacturing.

Yet another project had to do with evidence. “Product claims evidence must be preserved and that storage can be costly and time consuming.” explains Kyle De Jong, Assistant General Counsel - Global Disputes. One of the team members in the U.S. completed an inventory management project that brought significant cost savings and is now being replicated in Europe.

In total, these continuous improvement projects and others have resulted in a reduction in the total cost associated with product liability disputes of 18 percent since 2017. The benefits are not solely financial: The team’s employee engagement scores increased by 9 percent in the last year.

“Whirlpool Corporation’s Dispute Resolution team’s use of continuous improvement principles and tools empowered them to reduce external costs, while driving internal efficiencies and improving consumer experience. They have set the standard for using continuous improvement across the entire global legal team to drive efficiencies, allowing us to focus on the most strategic priorities,” says Kirsten Hewitt, Whirlpool Corporation's Chief Legal Officer.

As the team adopted the discipline and structure of CI, the effort also brought about a significant change in the culture of the team and the department. “What this represents is a diverse team of professionals at all levels of the organization following processes to avoid litigation and reduce costs in a high-risk space for the company. These are incredible results,” De Jong says.

It's important to think of continuous improvement as the way you do the work, not something sitting on top of the work, Spira advises. “It’s not meant to be another stone on the wagon. When CI becomes part of how you do the work, it’s much easier to incorporate into the day-to-day.”