Exelon is a Fortune 100 company that works in every stage of the energy business. The 227-person Legal department is led by General Counsel Thomas O’Neill and Melissa Lauderdale-Ward, Head of Legal Operations and GC Chief of Staff. Under continuous pressure from a series of mergers, Exelon had not issued an RFP for law firms since 2012—a clear starting point.

Lauderdale-Ward engaged HBR Consulting to assess external legal work. Exelon’s focus was clear, says Kevin Clem, Chief Commercial Officer at HBR. “Many of the partnerships with external firms were already deeply ingrained. Exelon was seeking to strengthen those partnerships for ongoing program development, not just ‘one-and-done’ engagements. They were looking for equivalent or better quality, not just the cheapest option. And they made it clear that, as a Fortune 100 company, they wanted to leverage industry best practices.” 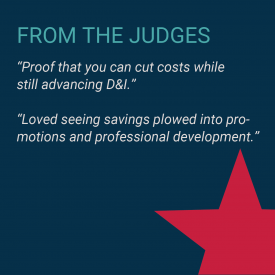 HBR analyzed two-and-a-half years of outside legal spend, looking for high-level savings opportunities. They took a deep dive into the data using different levers. “We were very surprised at the wide range of rates, and the partner time versus associate time we were paying,” says Lauderdale-Ward. HBR helped Exelon update its billing and timekeeper guidelines to reflect best practices, resulting in savings of approximately 1 percent in fees and 3 percent in expenses.

The analysis also revealed that Exelon had used 212 firms in 2018, and that 80 percent of spend went to 36 firms. With HBR’s support, Lauderdale-Ward issued an RFP to identify core firms that met not only Exelon’s financial and practice area criteria but also standards around diversity, staffing, and environmental sustainability; 31 firms were invited to respond.

After a Saturday morning team meeting that exemplified the involvement and engagement of Exelon’s senior legal leadership, according to Clem, seven firms were selected as preferred providers. To deepen its relationships with those core firms, Exelon:

Now, 44 percent of Exelon’s outside counsel spend goes to these seven core firms, and a volume discount of 2.6 percent has been realized from establishing the panel program. All practice-area leaders see quarterly metrics on spend.

Next, the team turned its attention to matter-level spending. Bringing in HBR Consulting partner PERSUIT on a one-year contract, Exelon rolled out its competitive bidding platform in a pilot. This software-as-a-service solution allows members of Exelon Legal to evaluate and select the right firm at the right price for individual matters. One of its key features is a one-hour “auto-negotiation” period at the end of the bidding process during which firms can see their price ranking and reduce their bids.

“The bidding and reverse auction model works well with the panel process,” says David Falstein, Director of Client Strategy and Success at PERSUIT. “It brings in considerations other than cost, and the client does not have to select the least expensive option every time.”

Some say that RFPs disadvantage minority outside counsel, but Exelon and its partners carefully structured their selection process to support their D&I objectives. They often include pre-qualified minority- or women-owned firms in their invitations to submit proposals, including options for alternative fee arrangements (AFAs). Their targeted efforts have resulted in a 27 percent increase in spend with MWBE firms and an 8 percent increase in spend with diverse associates at majority white firms.

Exelon had limited experience with AFAs prior to the PERSUIT deployment, says Lauderdale-Ward, and successful change management was crucial to driving widespread adoption. She began with a committee of volunteers; successes earned recognition from O’Neill as well as financial rewards. Now attorneys are encouraged to use PERSUIT for every matter at Exelon. Since deploying the platform and other efforts to manage spend, Exelon has decreased outside counsel spend by 31 percent, enjoyed greater budget predictability, and reduced outside counsel budget variation by 60 percent.

The savings helped to fund investments in the Legal team. Many of its members were long-tenured but opportunities for promotion were limited and not always viewed as consistent. After an internal organizational assessment identified changing business needs, the department was re-aligned around those.

A renewed commitment to upward mobility, learning, and growth manifested in new career paths, individual development plans, and professional development opportunities. Exelon created a job ladder for the first three levels of attorneys and adjusted its attorney compensation upward to align with updated benchmarks. The department is also clearly defining competencies for legal professional roles, updating job descriptions, and developing skill-set training for the entire department. Eleven percent of the department received promotions or practice area changes in the first year as part of this realignment.

“Our people are the most important investment that we can make. It is wonderful to be recognized as an ACC Value Champion,” O’Neill says.