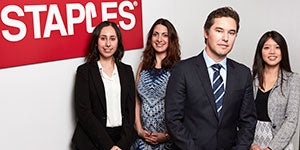 Staples operations in Australia and New Zealand are not the retail-store operation that customers in the United States are accustomed to (corporate headquarters is in Framingham, Massachusetts). Staples down under is a pure Internet play, with over $850m in sales and employing over 1,600 people. Business is focused on corporate and government clients. Troy Swan, Head of Legal and Company Secretary, has been with the company for four years and managed the transition from Corporate Express to Staples, following the Staples acquisition. He heads up a four-person legal team based in Sydney.

“Although Staples sells one in every four pieces of paper purchased in Australia, the company has undergone a reinvention as business in our core category of products is slowly declining,” he says. “We have been working to generate new revenue streams in new categories that support the needs of our existing clients. These new categories were like a number of smaller businesses within a larger one. Over the past year, we have focused on equipping our sales team with support, confidence, and an entrepreneurial spirit that will allow them to grow those businesses exponentially.” Some examples include cleaning and facility supplies, kitchen and canteen food and supplies, safety products, technology, and office furniture.

Thus, Project Reinvention was born. Although a companywide initiative, specific programs are the responsibility of the legal department. They include:

In all of these efforts, Swan says he benefited enormously by having an aligned and motivated team, great support from the US corporate office and working for a company that embraced the entrepreneurial spirit, innovation, and change. “The Assistant General Counsel at Staples, Inc., Mark Weiss, often describes himself as a business person with a law degree, and this is the commercial culture we are seeking to emulate in Australia,” Swan says.

For the first and largest step, changing culture, Swan explains that the previous context was a low tolerance for risk and an inaccessible legal department; only people at a certain level of the organization were able to request legal support. Quoting the words of Staples, Inc., General Counsel and Company Secretary, Michael Williams, “We don’t want to be the Department of No,” Swan says. “We wanted to encourage and enable the new lines of business with systems, processes, and plain-language practical advice and contracts.”

The legal team strove to engineer a mind shift from risk aversion to risk tolerance and management. By promoting a culture of teamwork, accessibility, and open dialogue, they worked with the sales team to implement innovative commercial arrangements with corporate customers, designed to increase revenue and promote the Staples brand, especially in non-traditional categories. As part of the digitization effort, the legal department created an electronic “front door,” a single process anyone can use to request legal assistance.

To prevent that accessibility from exponentially increasing volume, the legal department helped the rest of the organization to develop legal IQ that enables more discretion and self-service. Through group training sessions, train-the-trainer activities, online modules, and using every touch point as one-on-one coaching opportunities, the sales team was educated and empowered on a range of topics such as contract law, nondisclosure agreements, workplace rights and wrongs, ethics, and competition law. Coupled with simplifying such processes as contracts review and approval and customer agreements, the legal department saw its workload in low-risk transactional services decline by over 40 percent, which allowed them to focus that energy on higher-value work. They even codified risk management, creating a checklist that identifies the high-risk provisions in a contract and an easily understandable framework for the sales team to follow.

“Raising the legal IQ has driven a marked decrease in requests for assistance, allowing the legal team to focus on higher-value efforts, thereby reducing the need to seek external advice,” says Swan. External legal spend has been reduced by 52.3 percent. Meanwhile, members of the legal team are more satisfied: According to a recent survey, the legal department reported the highest levels of staff engagement—97 percent—of any department across the business.

That may be because they are adding value to the company in innovative new ways. For example, they advised on the development of several new business lines, including managed print services; worked on several acquisitions and divestment opportunities; took on several major cost recovery matters; and assisted on tenders and negotiations that have resulted in conversions worth more than $100 million. The legal team also met its original goal: to put sales team members into an entrepreneurial environment, equipped with the education, risk appetite, and tools to develop new sales categories for Staples. With strong support from the legal department, more than 50 percent of the company’s annual revenue now comes from non-stationery products.

"This department took the initiative to add to the bottom line of the business. They built strong partnerships with internal partners, standardized and streamlined the contracting process…A true shift in focus from risk aversion to risk tolerance. Love the concerted effort to raise the 'Legal IQ' of business partners."