With their "Re-engineering Legal Support" initiative, Caterpillar's Deputy General Counsel Michael Sposato and Senior Corporate Counsel Byron Buck hit the value trifecta: decreased spending, increased budget predictability, and improved outcomes, including enhanced employee and customer satisfaction. Working with multiple partners to disaggregate work and calibrate spending based on value and complexity, they formulated a model that is a superb example of the wave of the future. Here's how it came about:

In early 2011, the commercial side of Caterpillar's business was still coming out of the economic downturn of 2008-2010. Demands on staff were increasing, especially reviews of purchasing documents; and while staff were doing their best to keep up, turnaround averaged five days and only 50 percent of documents were getting meaningful review.

"There was unhappiness on both sides. Clearly something different was needed," says Sposato. The timing was good: He and Buck decided to piggyback on a department-wide review of legal process outsourcing and other potential resources that could be leveraged. The environment within the company was conducive, Buck says.

"The Caterpillar production system uses lane strategies in manufacturing operations. We started drawing connections that could apply to the legal department. A logical outgrowth of that strategy was that legal documents span a spectrum from standard to highly customized."

The department teamed with BakerHostetler, Pangea3 US and Heyl Royster to re-engineer its legal teams to use lane strategies to allocate work to the most appropriate resource. Legal lane strategies break a bucket of work into smaller groups based on complexity. The work is allocated to the resource with the lowest level of expertise and cost required for the task. In-house resources are assigned first; gaps are filled by flexible resources. Tools like playbooks, escalation processes, quality review and metric tracking facilitate the use of lower-level resources, ensure success and optimize the process. 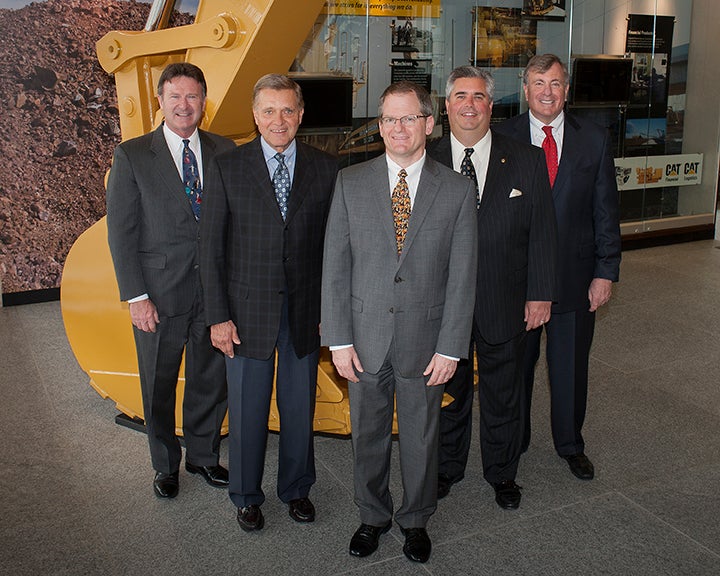 The complexity of a task determines the lane through which it proceeds. In-house attorneys, paralegals, outside counsel, law school interns, contractors and LPOs are resources that can be deployed. Buck and Pangea3 developed playbooks for the most common agreements. In the case of those purchasing documents, for example, which are now reviewed by Pangea3 and Heyl Royster, Caterpillar was able to increase the percentage of documents reviewed from 50 percent to 100 percent; reduce turnaround times to less than two days in most cases; reduce the cost per hour of support by 37 percent; and reduce the average cost per document by 36 percent.

However, Buck emphasizes, the project was not begun as a cost-cutting initiative. "The goal for us was increased customer and employee satisfaction," he says.

Next, Caterpillar determined to deploy the lane strategy for litigation. They teamed with Washington, DC-based BakerHostetler, with whom they have a 30-year history. "When we heard about the lane project, we were not surprised by the foray into litigation," says Partner Bob Abrams. "We were thrilled to receive the call and to see what we could do." It was clear that the area most ripe for efficiencies was that of discovery support and document production.

Using advanced machine learning tools, Caterpillar set about to assess the likely relevance of nearly 600,000 documents quickly and efficiently. Two people "taught" the software and helped it to refine results. This effort alone resulted in more than $250,000 in savings and made strategically important documents available much more quickly.

E-discovery expert Gil Keteltas of BakerHostetler says, "Although many corporate clients seek to control spending on outside counsel, the most costly part of litigation is discovery. It's decentralized and re-invented in every case. Caterpillar has truly taken control by pushing out expectations and being open to modern, cutting-edge ideas about managing massive document sets.

"Since the initial phase of the project, lane strategies and LPOs have been deployed to manage the traditional review of contract documents and of regulatory and compliance reports. The company partnered with LPO Pangea3 to create tracking and reporting databases for anti-corruption reports and data that have reduced the average cost per review by more than 85 percent. Despite the automation, at least two pairs of eyes still hit every work product.

"There were some worries within the legal department about how the work would be done, and initially there was quite a bit of resistance. But we just kept reassuring people that their jobs would still be here and would be much better," Buck says. There was some discomfort on the part of internal clients as well, he says, but "they quickly found that they had better information, more understanding, and that things were handled more consistently, more completely, and with greater velocity."

"Our approach was that of a world-class manufacturer, in terms of how we do things and striving to constantly improve," says Sposato. "But this approach would work in many environments. How you work is as important as what your work produces. For us, change management and project management were key, as well as buy-in and commitment from the company's senior leadership."

"Caterpillar worked effectively with two law firms and an LPO to deploy an intensive strategic sourcing/staffing program, dubbed 'legal lanes,' and not only saved lots of money but also increased employee satisfaction because the attorneys got to shift attention to more strategically important work."

"Impressive results, including improved turn-around times, reduced costs and elimination of backlog. Caterpillar uses 'lane strategies' to fit the size, complexity, risk and needs of each matter with the resources required to ensure its successful completion."