When Cam Findlay joined Medtronic as general counsel in August 2009, the company faced numerous legal challenges and was spending a lot of money dealing with them. "In past years, Medtronic had grown quickly and had been highly profitable," Findlay says. "For these reasons, the company had never really faced pressure to make the legal function more cost-efficient."

Findlay had worked previously at Aon Corporation, a large insurance firm. Although Medtronic and its legal department were roughly the same size as Aon and its department, Medtronic's outside legal spend was roughly five times that of Aon's. "Medtronic had for many years had the luxury of not having to worry too much about spending," he says. "It struck me that senior management spent much of their time thinking about revenues and not so much thinking about costs."

Circumstances demanded dramatic change. The health care marketplace was in upheaval, and legislation and regulation were posing unprecedented and momentous challenges to Medtronic. Findlay began to focus on total transformation. Its key elements include a preferred provider program driven by an RFP process, alternative fee arrangements, new processes and technology, and an increased focus and reliance on measurement and metrics. 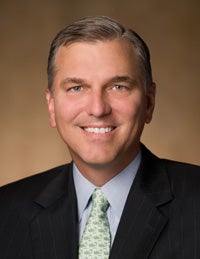 In 2011, the legal department conducted an RFP-type process and implemented a preferred provider program to significantly reduce the number of firms doing work for Medtronic. "When you work with a lot of firms, you're a small client of a large number of firms," Findlay explains. "We wanted to be a large client of a small number of firms." The department implemented its Medtronic Preferred Provider Program (MP3), and succeeded in reducing the number of outside firms doing the vast majority of Medtronic's work from several hundred to fewer than 40. Findlay says he now tries to have 90 percent of the work done by MP3 participants. Benefits include reduced spending, enhanced partnerships with firms, and improved access to firms' most talented lawyers.

"We just looked carefully at what law firms do," Findlay says. "I'm happy to pay for complex legal work, but I don't want to spend $400 an hour for an associate to do document review."

"When we first proposed the AFAs, the firms were not particularly surprised, but they reacted with differing degrees of enthusiasm. Some really wowed us with their ideas," Findlay says.

"It's a very good time to be a buyer of legal services."

The legal department has worked quickly over the past two years to put in place the latest in legal process and technology. They are implementing a new matter management system and e-billing system that allows lawyers to carefully manage individual matters and provide department leaders with priceless information on legal spending by firm, matter, and even task.

"Medtronic has traditionally been a very siloed place; each business unit has its own legal department in addition to corporate. The feeling in the businesses was that the litigation department would take over their matters and not involve them strategically or tactically. We really have tried to improve communication up, down, and sideways," says Findlay.

Financial forecasting has been improved by the use of monthly expense reviews, sophisticated metrics, and trending dashboards. Comprehensive reports and dashboards are distributed to key decision makers monthly and are designed to trigger questions and constructive scrutiny. Key metrics include legal spend by firm, average hourly rates, legal spend as percentage of total revenue, open matters by matter type, timeliness of invoicing, and many more. "Having better information and metrics helps us manage the work better," Findlay says. "Plus, the firms know we're watching, which incentivizes them to manage carefully."

Results have improved across the board, in cost, predictability, and outcomes. In fiscal year 2011, Medtronic's total spending on outside counsel decreased 31 percent. The forecast for the current fiscal year includes another decrease, resulting in a total decrease in spending of approximately 40 percent over the past two years.

The legal function now anticipates and mitigates new legal risks, which has improved its legal outcomes. Medtronic has successfully litigated several class actions in the areas of products liability and shareholder suits. In particular, it has achieved dismissals of mass tort actions, securities class actions, and ERISA class actions at the pleadings stage, saving the company tens of millions of dollars in potential legal costs and allowing for extremely favorable settlements. The company scored a major $100 million-plus win in a patent infringement suit against a competitor, and it continues to hold its own on several other significant defensive IP matters. Medtronic has resolved four major investigations by the Department of Justice, three with no action by the Department and one on terms acceptable to the company.

"These are not really brilliant innovations. We just adopted best practices," Findlay says.

"An important focus on no longer being reactive (that is, just responding to whatever comes at the legal department) but proactive: thinking through the legal issues, how they are managed and how the process can be improved… Significant and measurable savings even as outcomes also are improved."

"Through a combination of RFPs, alternative fee arrangements, technology and metrics, Medtronic transformed the legal function."