In September 2008, the GSK law department began to radically change when the company appointed a new General Counsel, Dan Troy, a firm believer that the hourly-rate billing system can promote inefficiency. He became responsible for implementing one of the top priorities of GSK's CEO: to significantly reduce outside legal spend, while continuing to obtain excellent legal representation.

Bob Harchut, head of U.S. litigation since 1997, was asked in November 2008 to lead a new team within the law department called the Global External Legal Relations Team (GELRT). Its mission was to dramatically change the paradigm by which GSK paid for legal services by moving all outside counsel assignments throughout the world to value-based fee (VBF) arrangements whenever feasible. 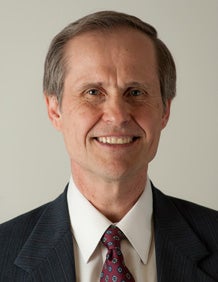 Harchut was somewhat doubtful at first. "I thought the mandate to do this for all matters around the world might be impractical at the time," he says. "Other markets are not as far along in accepting VBFs, except the United Kingdom, and I thought putting complex litigations and transactions onto VBFs would be extremely difficult."

Troy insisted that he truly wanted the arrangements to be win-win. "He believes that if firms are willing to put some 'skin in the game' to help us meet our cost savings goals, then he is happy to reward the firm for the value they provide to GSK," Harchut says.

Harchut began by assembling a cross-functional team including Procurement, Finance, IT, and a Lean Sigma project manager to develop tools and processes. Although Harchut had experienced a Six Sigma initiative in the mid-nineties, "it was initially hard to see how it could readily benefit the law department," he says. Nevertheless, the team looked at various tasks and processes, and mapped them out in detail with corresponding resources.

"It was an eye-opening process," Harchut says.

Troy was willing to invest in the law department and in the initiative. Harchut hired two financial analysts to help him track metrics and chart the success of the effort. GELRT then began working with law firms, deploying a pilot with 10 major U.S. litigation firms that represented the majority of GSK's legal spend. "They were very receptive and willing to work with us," Harchut says. "That may have been due, in part, to the effects of the economic crisis at the time."

A willingness to experiment was also key. Troy and Harchut espouse an approach of "launch and learn," believing that often perfection can be the enemy of the good.

Before the initiative began, less than 3 percent of GSK's external spend was through value-based fee arrangements. By the end of 2011, more than 68 percent of GSK's external spend was through VBFs, resulting in extremely significant savings. "One reason for this success was Dan Troy's tone from the top," Harchut says. Troy backed his VBF mandate by linking the annual bonus objectives of law department personnel to contributions to GELRT's progress, and he supported this by regular global broadcasts to the Law Department communicating progress towards the goal.

In the summer of 2010, GSK Legal launched its Outside Counsel Selection Initiative (OCSI), an electronic reverse auction program that has so far touched more than 80 firms. "This was a great idea that was brought to us by Marty Harlow and Justin Ergler, our colleagues in Procurement, who had been using online sourcing for sophisticated services in other areas of the company," Harchut says.

GSK Legal worked with Procurement to fashion OCSI into a matter-specific, mini-RFI tool that enables in-house counsel to easily request from firms their specific qualifications for a particular assignment. It provides GSK Legal leadership with an abundance of valuable metrics as to firms' quality as well as their ability to adhere to VBFs. The other main component of OCSI is the electronic reverse auction "Sourcing Room," which encourages aggressive fee competition among the qualified law firms.

A scorecard is carefully crafted for each matter, weighting key firm selection factors (e.g., matter-specific credentials, experience in jurisdiction, etc.) along with pricing; the low bid is not always the one selected. The model is flexible and scalable. It was rolled out globally in 2011. 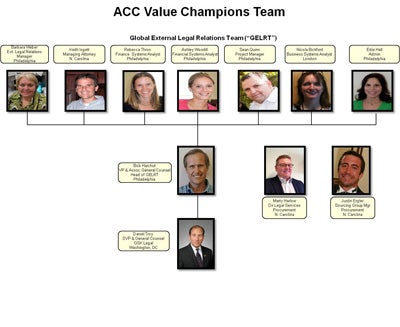 "The company decided small steps aren't enough and instead demonstrated that big steps can result in big improvements."

"The clear objective to move all of GSK's legal work to value-based fee arrangements and the use of technology and a scorecard to select outside counsel are novel and have led to substantial cost savings."